“Like the blooming and falling of the cherry blossoms, I try to capture something that has already vanished.”
– Ori Gersht

The three series, presented here together for the first time, indicate Ori Gersht’s fascination with the contrast-ridden dialectic between beauty and withering in Japanese culture. The deconstruction of the photographic image in his works emphasizes the fragile and transient nature of reality. Gersht’s landscape photographs are imbued with delicacy and picturesque beauty, but at the same time seek to touch the boundaries of pain. He often engages with traumatic historical events, which the landscape witnessed; occurrences that disappeared from the face of the earth, as if they never were. The video works and photographs of innocent-looking flower vases, which he created after 17th-century still-life paintings, are also characterized by a charged stillness and a prolonged anticipation, until a sudden explosion breaks the silence, dispersing shrapnel in all directions.
In the spring of 2010, Gersht embarked on a journey following the blossoming of the cherry trees which were planted in Hiroshima after the atomic bombing and at various commemoration sites in Tokyo in memory of the suicide fighter pilots (kamikaze), symbolizing their sacrificed short lives. As part of the series Chasing Good Fortune, he photographed cherry blossom petals in Hiroshima, as they fell on the dark river and covered the contaminated soil with a white carpet, as if trying to obliterate one of the greatest traumas in human history.
The Buddhist term mono no aware denotes the sorrow of human existence, a sadness underlain by acceptance of the ephemerality of life, of processes of flowering and wilting. This feeling is also echoed in another series, Floating World, photographed in Japan in 2015, in which Gersht focused on Zen gardens, intended to inspire quiet meditation. Photographs of reflections, which dissolve the boundary between water and sky and between tangible existence and the virtual world, hold the gaze in continuous contemplation on the nature of visible reality.
The Japanese arts of garden design and flower arrangement (Ikebana) embody a mythical admiration for nature along with a strong desire to silence the constant threat inherent in it through a miniaturized world, which represents harmony between man, the earth, and the sky. Gersht’s new video works, created especially for this exhibition, are the result of a collaboration with Japanese Ikebana artist, Rie Day. Like the photographs, they seem to freeze a singular moment. Photographing the Japanese Iris flowers, which grow around water and bloom for only a few days, at their peak posed a timing challenge. Their braiding (in Ikenobo style) created an impressive structure, protruding toward the sky and representing the universe and its beauty. Gersht’s camera oscillates intermittently between the flowers and their reflections, until raindrops sparkle in the black background. The rain grows heavier in slow motion, whirling their reflections. The mesmerizing sight of their disappearance and reappearance alternately dissolves the reality of their existence. Gersht arrests the moment of blooming, ostensibly removing it from the temporal cycle. At the same time, the rain reminds the picked flowers of the source of their vitality.

Ori Gersht (b. 1967, Israel; lives and works in London) is a photography and video artist. His works are exhibited in leading galleries and museums around the world. 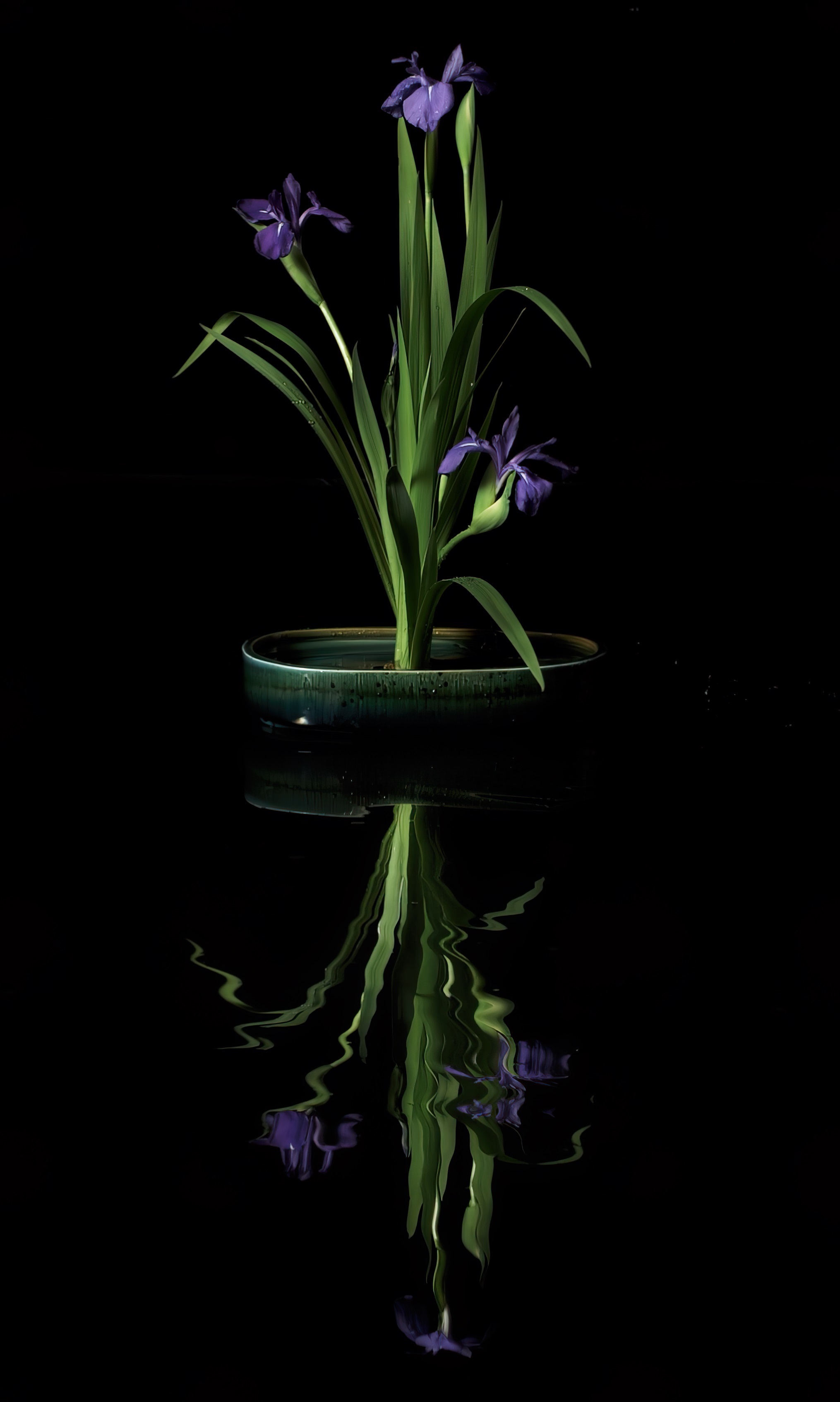